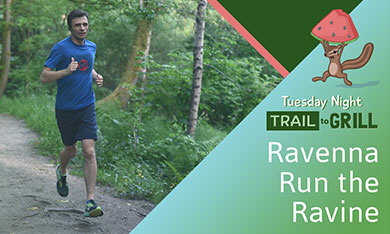 Thanks to Oiselle for sponsoring the Tuesday Night Trail to Grill Series.

Online pre-registration closes Monday, June 6 at 11:59pm. Event-day registration will be available by cash, card, or check made payable to Northwest Trail Runs. Click the elevation profile to see a larger image.  Elevation data were measured with a Suunto Ambit sport watch.

The aid station will be set up to offer individual portions only, and participants may touch only items they are taking from the table.  Only staff may handle communal serving containers, and surfaces will be sanitized frequently throughout the event. FOLLOWING AND PASSING ETIQUETTE
If you find yourself following other runners at a similar pace, please do so at a distance of at least 20 feet (6 meters).  When passing, please announce your intent well in advance, in case the runner in front of you wishes to step to the side of the trail to maintain a comfortable distance.  Where the trails are narrow, please let other participants pass you if they want to get by. It is a passing runner’s job to tell the person in front that they wish to pass.