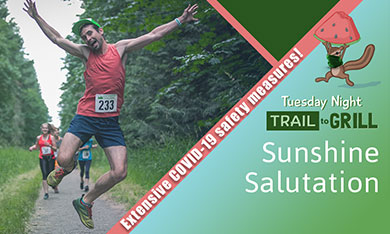 * Youth runners may start in the Youth Series start wave or individually or in small groups at a time of their choosing.

Thank you to Oiselle for helping promote the Tuesday Night Trail to Grill Series. Bring in your bib number post race or proof of race registration and get 15% off any item at the Seattle Flagship store in University Village!

Part of our duty as event organizers is to plan carefully for safety.  We take this responsibility seriously, and we appreciate the trust you place in us by coming to our events.  The COVID-19 pandemic has meant a pause for our events, but it has also meant a lot of extra work over the intervening months adapting our events to mitigate the new risks of the pandemic.

Because confusing and often conflicting or politicized information has created doubt and uncertainty about safety and relative risk, we want to briefly address the basic safety of trail running: The consensus opinion of the infectious disease experts is that SARS-CoV-2 (the virus that causes COVID-19) is far less likely to transmit from person to person outdoors, primarily due to the movement of air dispersing virus-bearing droplets to a low concentration that is unlikely to result in infection.  Outdoor transmission is still possible, but studies of the origin of cases seem to suggest that it is roughly 100 times less likely that any given case will have resulted from outdoor transmission.

It is also the case that brief contact with a contagious person is far less likely to result in viral transmission than sustained close proximity.  Taken together with the relative safety of being outdoors, this means that if you briefly pass close by an infected person on the trail, there is only a vanishingly small chance of you catching the virus from them and getting infected.  Of course we still want to take precautions to mitigate small risks, but with reasonable modifications, we believe that trail running events can be one of the safest and most health-promoting things you can do during the pandemic.

Our staff has looked toward expert guidance—including from health and labor departments at the State of Washington (via the guidance from the Governor’s office) and numerous email bulletins and web resources from the Centers for Disease Control—as we implemented extensive safety protocols to eliminate unnecessary risks.  The list of steps we take is long, so we won’t include it here, but the general areas we emphasize are physical distancing, PPE/masks/hygiene, sanitizing, screening, staffing for safety, communications, and training.

You have an important role to play in facilitating a safe event, and we ask that you follow #RecreateResponsibly guidelines and adhere to the guidelines below to help us keep you and our broader community safe:

We will ask you to affirmatively agree to abide by this code of conduct before you participate in the event.  We also ask that we be allowed to contact you after the event if we discover that someone at the event was sick and have reason to believe you may have been exposed.  If you become sick soon after attending the event, we would appreciate you letting us know, so that we can track potential risk to our staff and other participants. Aid Station
The aid station is located near the Start/Finish (no remote aid station), and it offers water, electrolyte drink, and some carbohydrate-rich or salty foods, such as cookies, pieces of energy bar, gels, chews, chips, fruity candy, fig bars, and/or bananas.

* Youth runners may start in the special Youth Series start wave or individually or in small groups at a different time of their choosing. Make sure to stick around after your race for hot dogs, veggie dogs, watermelon, and other yummy snacks!